George R.R. Martin has arrived at AutoCrit! Nestled alongside esteemed authors such as Tom Clancy, Michael Crichton, J.K. Rowling, Emily Giffin, Jodi Picoult and many more, you can now compare your writing directly with the father of dragons himself.

To celebrate the arrival, let’s take a brief look back at this lauded author’s career, and where he might go next…

Born on September 20, 1948, in Bayonne, New Jersey, George R.R. Martin is the bestselling author of more than 15 novels and a wide selection of novellas and short stories.

While Martin’s meteoric rise to fame largely occurred with the 2011 arrival of HBO Productions’ TV adaptation of his A Song of Ice and Fire series, his early career and interests were quite a distance from the majestic lands of Westeros.

As a child, Martin developed a keen interest in comic books, especially those of Stan Lee and Marvel Comics. He first set out to sell his science fiction short stories in 1970 at the age of 21 with his first commercial sale being The Hero, which sold to Galaxy magazine and was published in February 1971.

By the end of 1973, he had been nominated for his first Hugo Award and Nebula Award for his story With Morning Comes Mistfall, published in Analog magazine. His first novel, Dying of the Light, was published in 1977, and throughout the late ‘70s, Martin began to write science-fiction/horror hybrid pieces in a bid to prove that the two genres could successfully be blended.

This goal led to the creation of Nightflyers, a 1980 novella that was eventually adapted to film in 1987, and more recently a (now canceled) television series adaptation in 2018.

An eclectic writer, Martin has delved into science-fiction, horror, fantasy, and writing for television – including a short-lived (and unfortunately unproduced) stint on cult TV show Max Headroom.

The first of George R.R. Martin’s sweeping epics in the A Song of Ice and Fire saga was published in 1996, titled A Game of Thrones. Sequels followed in its wake, with A Clash of Kings arriving in 1998 and A Storm of Swords in 2000. The world welcomed A Feast for Crows in 2005, seeing the title hit the #1 spot on The New York Times Bestseller list.

The same accolade was afforded to A Dance with Dragons (2011), which won the 2012 Locus Award for Best Fantasy Novel and received a slew of high-profile nominations elsewhere. 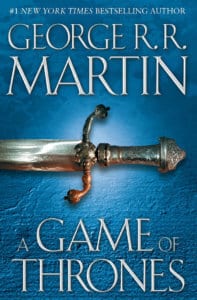 The success of HBO’s television series Game of Thrones elevated the material to the level of cultural phenomenon. It saw members of its cast catapulted to the upper echelons of Hollywood, and spawned an incredible amount of mass-market memorabilia. Extended interest in the world of Westeros saw further licensed adaptations making their way into ever smaller niches such as role-playing and tabletop gaming.

This explosion of interest thrust Martin into the worldwide spotlight and earned him a space on Time magazine’s list of the most influential people of 2011. Martin has stated that he has two more novels planned for the series: The Winds of Winter and A Dream of Spring. Recently, Martin joined forces with popular video game studio From Software to create their title Elden Ring, slated for release in June 2020.

Known for his intricate and complex character work, strong world-building, and often ruthless inclination to kill off major characters, George R.R. Martin is an author whose writing carries an incredible gravitas – and an author we’re both delighted and honored to introduce to the AutoCrit editing suite.

Are you ready for battle? Join AutoCrit Pro now and you can compare your writing directly to the style of George R.R. Martin.

And don’t forget to check out our editorial breakdown of the Song of Ice and Fire saga, performed using the AutoCrit platform, right here.