When our AutoCrit Elite members finally get to enjoy seeing their hard work published, we like to take a few moments to help celebrate the success and share the word with the fantastic AutoCrit community.

This time, we’re proud to announce that long-standing member of the AutoCrit Elite family, John Hansen, has recently released the fifth book in his series The Bluesuit Chronicles! 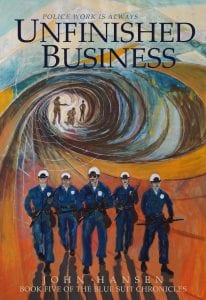 The saga continues with the unmasking of unseen forces aligned against the Police Department, and society in general, when an attack on Hitchcock by two hit-men hired by international interests is defeated. As the Department grapples with sexual predators and a growing drug epidemic, enemies of the Department, hidden within the City government and within the Department’s own ranks, have their own agendas for stopping it.

Early reviews indicate that John’s latest is off to a great start in the market, with one reader remarking: “Book 5 moves to show how difficult it is for Officer Hitchcock to continue to do right. Bad people are out to get him for his good work. He is a threat to their nefarious activities. There is even a very bad and high ranking policeman that puts Hitchcock and his family in extreme peril. I’m still waiting to find out what restaurant owner Juju is up to and who she works for. Great series and story. Another fine book by John Hansen!”

John tells us his goal when writing the series is to honor the Vietnam-era generation of suburban police officers, who did as much to hold the line as their brothers in the big cities did. Basing his work on his own genuine experiences – and those of his colleagues – he also hopes to introduce readers to the inner workings and challenges of policing in a culturally and politically hostile environment.

Of course, the names have been changed, to protect the innocent and the guilty.

John served four years in the military before 1970, including two one-year tours in and around Vietnam. He served as a patrolman with the Bellevue Police Department in Washington State for over ten years before transferring to the detective division for another eleven years, and has also traveled to other countries and continents as a licensed private investigator since 1992. He has three children and lives with his wife and step-daughter in Arizona.

Unfinished Business, along with the other titles in The Bluesuit Chronicles (The War Comes Home, The New Darkness, Valley of Long Shadows, and Day Shift), is currently available in both paperback and Kindle editions on Amazon.

You can also discover more about John and his books at the Bluesuit Chronicles website.

Congratulations, John. Here’s to the ongoing success of Roger Hitchcock and The Bluesuit Chronicles. A round of applause, everyone!