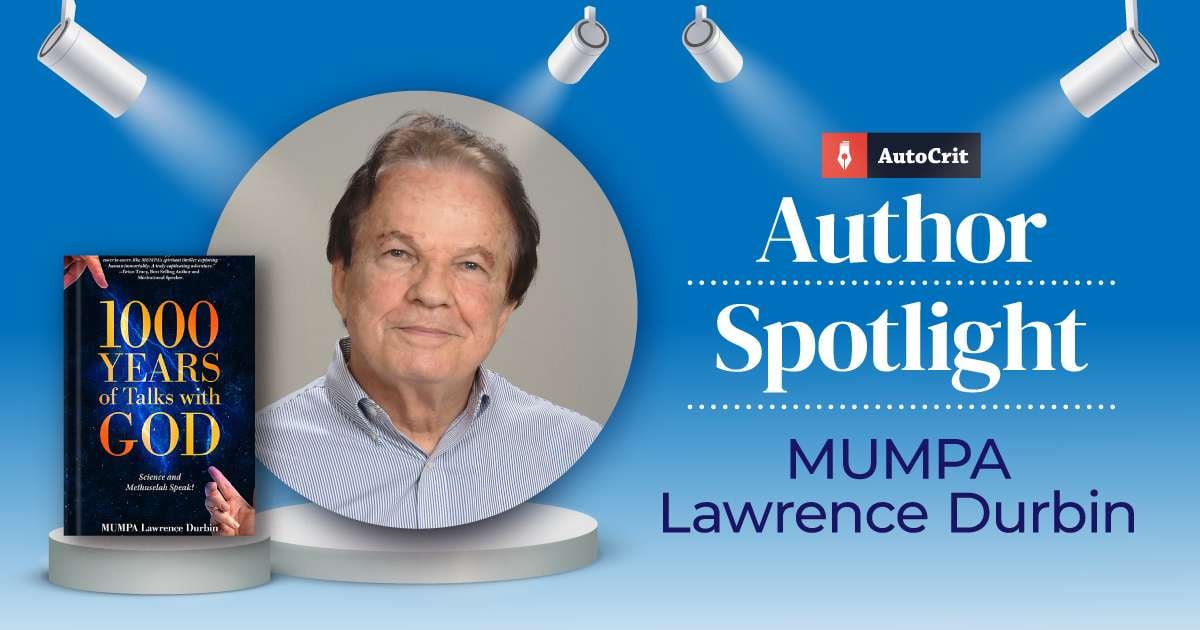 In this edition of Author Spotlight, AutoCrit member Lawrence “MUMPA” Durbin drops in to talk about his new fantasy thriller, 1000 Years of Talks with God: Science and Methuselah Speak!

Tell us a little about yourself and your background. Have you always been an avid reader and writer?

By age 12 I knew that I wanted to teach and coach. Six years later, I had a new passion – journalism – stemming from my experience as Sports Editor for my high school newspaper. In the end I chose teaching/coaching and did that for 12 years. Enjoyed every bit of it. I was recognized as a Master Teacher and won three championships as Head Coach of both football and wrestling.

At age 33 I began a new career in financial and estate planning, also for 12 years, going from a two-person office to a 15-person office including six Certified Financial Planners.

From age 45 to my 70’s I wrote articles for magazines and company periodicals as well as essays. It was not until COVID-19 came, however, that I decided to write seriously. Now I cannot stop!

My first wife is deceased. I have four grown children, am married again and have a 17-year old daughter.

We’re talking today about your book 1000 Years of Talks with God: Science and Methuselah Speak! What can readers expect from this book, and what inspired this particular story?

What can readers expect? Allow me to defer to a testimonial for 1000 Years… by bestselling author Ramy Vance: “Each chapter I read, I found myself saying ‘Whew’ and blotting the perspiration off my forehead. Thrills, mystery, spell-binding pace, romance to blush for, double ha-ha humor. I love MUMPA for entertaining me as much as I hate him for robbing me of sleep.”

I became interested in immortality thirty-six years ago when purchasing a home near the site of Ponce de Leon’s 1513 discovery, The Fountain of Youth, in St. Augustine, Florida. Now I read everything I can get my hands on regarding immortality of the body and the soul.

1000 Years… is a fantasy thriller about the lives of four immortals, one of whom is the lead. Jonathon Donald – age 120, face 25, body 20 – has survived the intrusion of world governments and threatening human thugs by adopting two critical strategies:

1) Seek the ultimate cover when in danger.

On his journey toward age 1000, he regularly interviews the Supreme Intelligence, one with a sense of humor, getting answers to mankind’s most pressing issues and universal questions. Jon evades high-tech intelligence agencies around the globe, falls in love with a mere (and hilarious) mortal, C&W gal Megan Riles, and sometimes performs Paul Bunyan-like feats which unfortunately makes it necessary for him to move on yet again.

Most of us can identify in a positive way with the goodness of Mother Teresa and the lawless methods of Robin Hood. Conflict moves our spirit, and we seek resolution.

Reviews have referred to 1000 Years of Talks with God as “reverently irreverent,” which sounds quite off-beat and refreshing. Did you always have a certain tone in mind for the story? Does it spin off naturally from your own personality?

Life is a constant faceoff between good and evil, right and wrong – in a human context not just a religious context.

Processed foods versus fresh? Cheating versus striving? Generosity versus greed? Creating stories with believable characters who struggle with these choices, just as we all do in everyday life, has [definitely] colored my writing. Seeing that some reviewers see my stories as “reverently irreverent” pleases me. I am hitting the chords intended.

Most of us can identify in a positive way with the goodness of Mother Teresa and the lawless methods of Robin Hood. Conflict moves our spirit, and we seek resolution.

Producing a novel – from planning and writing to publishing and marketing – is no small feat. Do you have any tips or recommendations to share with fellow authors who are currently facing down their first big project?

The reason I chose one word of advice is that it really is the key.

Once you get into a storyline which intrigues you, the book will get written. Sometimes enthusiasm comes before you start, but many times it comes after. So… START! 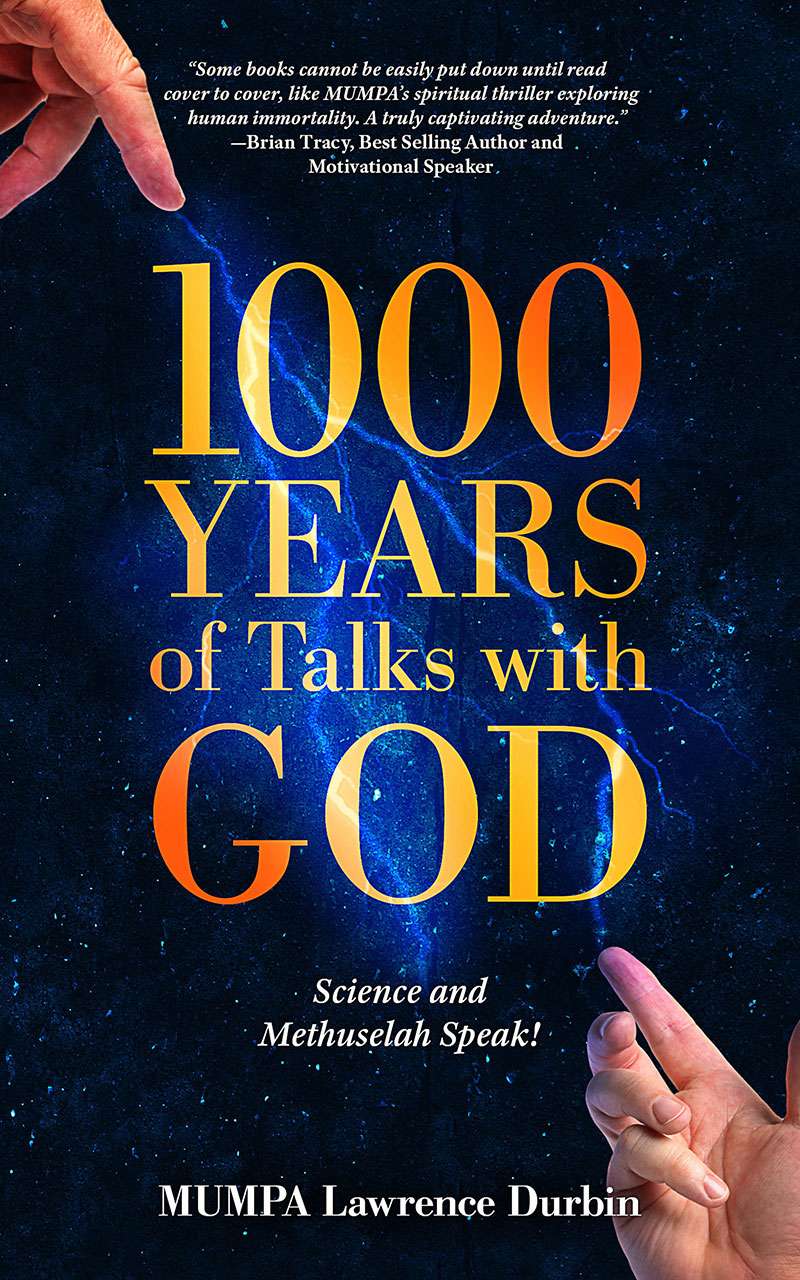 1000 Years of Talks with God is reportedly the first in a planned trilogy. Do you already have a direction in mind for the sequels? What can readers expect when it comes to the next entries?

The reviews are so positive on my first book that my best route is to continue the story of these four near-immortal characters and their conflicts in our very mortal world. However, I have a murder mystery and a thriller to publish before my Sequel to 1000 Years… comes out. The third book of the trilogy will follow shortly thereafter. Could it be a series? Based on initial reviews, yes!

Have you learned anything from writing the first book that you believe will help make sequels easier to tackle?

Yes, I learned as I started writing a sequel that since I already have a compelling story and excellent reviews, I should continue writing about the lives of these characters my readers enjoy. Unfortunately, I did not learn that until I tried to introduce too many new concepts into my sequel instead of sticking with the story and the style my readers liked.

I took a hiatus to write a fast-paced murder mystery which got me excited to write again. Like with 1000 Years…, I am writing with few mental blocks once again. Furthermore, I now have in my mind the right approach for my sequel.

There are few unbreakable rules in writing, but two that I believe in are:

1) Never bore the reader, and

2) Don’t publish anything that does not excite you, the author.

Take it one day at a time. Rome wasn’t built in a day, and your book won’t be finished in a day. Don’t wait for the “right time” to begin – just start. This will allow you to get into the flow of writing and overcome procrastination.

How long did it take you to go from initial idea to the final, published product? Did you always intend to self-publish? What were the biggest challenges for you throughout this journey?

Once COVID-19 hit and we were all in quarantine to one extent or the other, I had time on my hands. Too restless to watch more reruns of reruns, I started writing. 1000 Years of Talks with God was in my head for the past five years, and once I started, I had almost no mental blocks. It just flowed.

My reason for self-publishing is because I could not get a literary agent to give me the time of day. I knew I had a compelling story and searched through the self publishing companies. While I would never say no to the literary agent route, I feel that my growing brand reputation of putting out compelling stories make it a moot point.

Did you use AutoCrit to help prep the book for publication? If so, how was the experience? Did you happen to gain any particular insights into strengths or weaknesses within your writing?

I am just now using AutoCrit as I have used simple Microsoft Word in the past. What a joy it is to have the tools to check my writing after each chapter for mechanical and literary corrections and suggestions.

AutoCrit automatically helps me avoid common writing mistakes so that I can focus on messaging.

What’s next for you?

2nd Quarter: Double Crossed is a unique murder mystery planned for early April release. One of two stunning twin sisters is a murder victim. To solve the mystery, detectives must go back a thousand years in time to the past life of one of the sisters – a psychiatric phenomenon called regression (our souls are eternal and have lived past lives) – to solve the mystery.

4th Quarter: From Starvation to Stardom is a thriller about a Filipino family of seven children and their prostitute mother who, in facing daily starvation, achieve unfathomable success.

2023: 1000 MORE Years of Talks with God… continues the journey of four near-immortals who bring the good news to the modern day world while trying to survive the intrusion of world governments and threatening cartel thugs who want to know their “secret.”

The old football coach in me may show here, but, you know what? It’s the proven method to consistent success, so here goes:

Take it one day at a time. Rome wasn’t built in a day, and your book won’t be finished in a day. Don’t wait for the “right time” to begin – just start. This will allow you to get into the flow of writing and overcome procrastination.

Also, as you are working on your book, start building an author platform. Create a website and a blog, be active on two or three social media channels, and start capturing emails. It takes time to build a personal brand (I’m still in the throes of this), but doing so will help you immensely as you strategize how to launch your book.

I’ve taken several courses to help me understand how to build a brand, run Amazon ads, and market my books. If this sounds overwhelming, remember it takes time. Start small and be consistent. This will create momentum in all you do to bring your books to life. 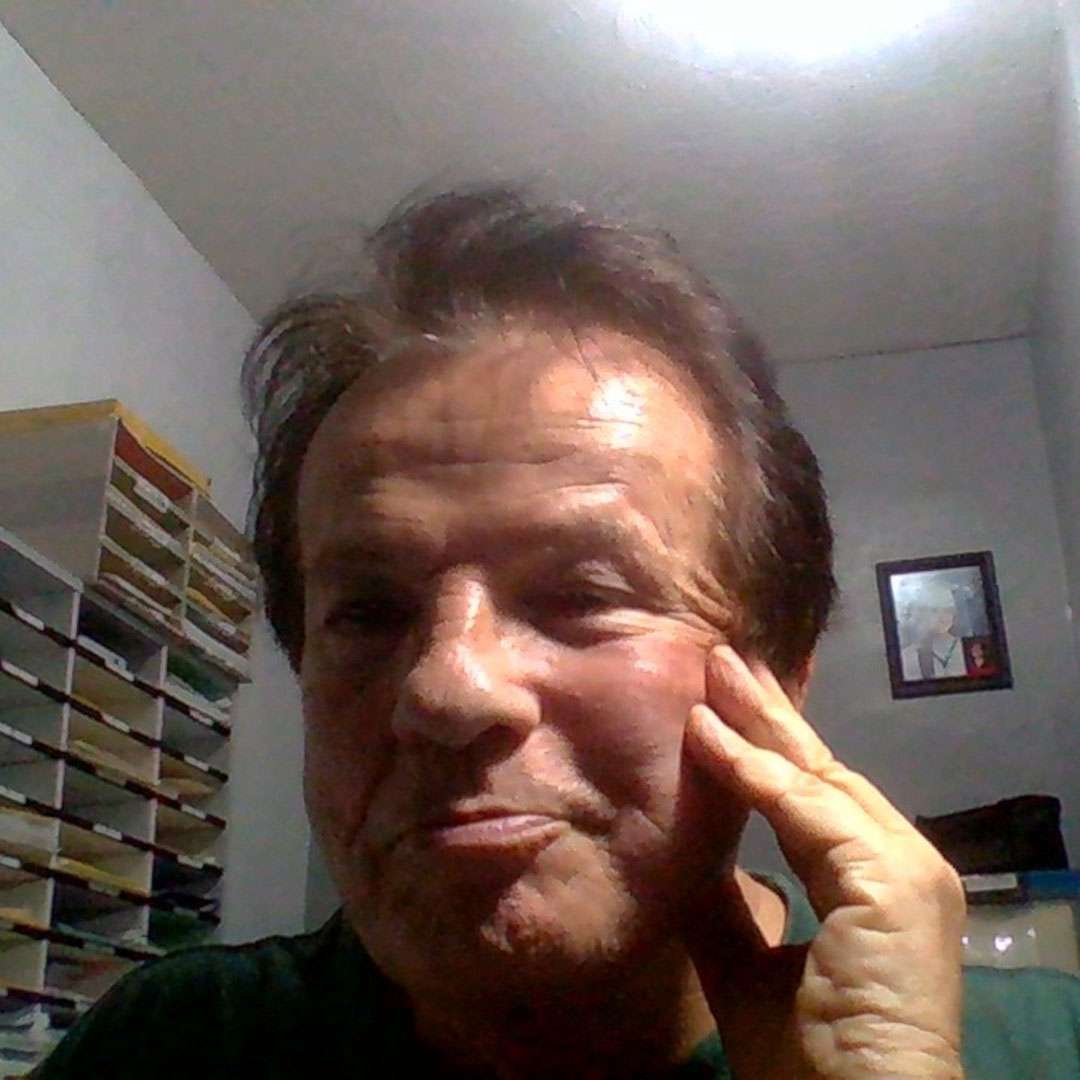 Today, MUMPA writes thrilling fiction about near-immortals that he believes have graced our planet from time to time, including this present time. He writes with break-neck pace, weaving spellbinding mystery and humor, romance, and spirituality.

Discover more and download your free bonus chapter from 1000 Years of Talks with God at Lawrence’s website here.