Beyond the Three Act Structure: Supercharge Your Script with the “Matryoshka Effect” 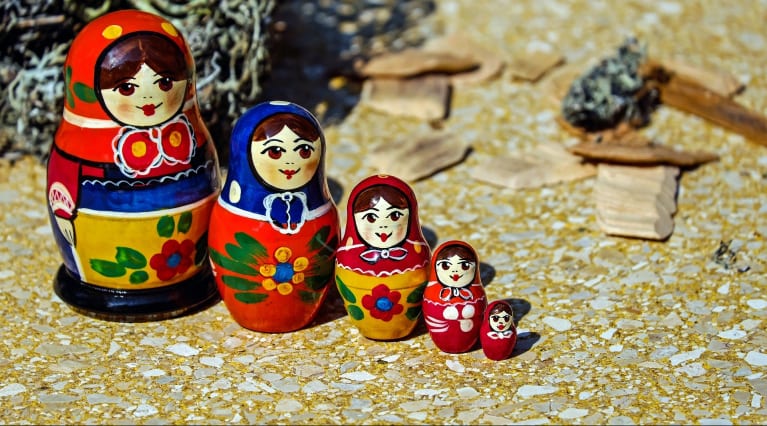 Getting your story planned out in a solid three act structure is one of the first big wins when preparing to write your script.

You know your inciting incident; you know where the final battle will take place and where and how your climax will happen.

Your hero’s journey is packaged and ready to deploy.

But then you put it all down on paper… and something feels off.

There’s a lack of energy – like that extra drop of fuel your script needs so it can blast to full force is missing.

Well, you’re not alone. Keeping up the pace can be difficult, especially when you’re focused on other critical elements like avoiding exposition dumps, showing instead of telling and indicating your protagonist’s evolution across their character arc.

To help you bust out of that rut, here’s a quick hack that will supercharge your screenplay – no matter if it’s a character drama, white-knuckle action film or nerve-shredding horror flick…

It’s something we like to call the “Matryoshka Effect.”

But, first… let’s run through a quick primer on the three act structure, because it’s integral to the Effect.

What is the Three Act Structure?

Simply put, almost every successful screenplay in existence adheres to the three act structure. Broken down to its simplest form, this structure is the Setup, the Confrontation, and the Resolution.

Also known as the Beginning, Middle and End.

During the first act – the Setup – your story’s major characters are introduced. Here, you’ll display your setting and make the primary rules of your universe apparent – and you’ll kick it all off with a bang, some kind of sequence that catches the audience’s full attention within the first 10 minutes.

This is also where your Inciting Incident will take place. This is an incident that catches your protagonist off guard – something that interrupts their usual routine and sends them down the road you’ve paved for them.

Act II: The Confrontation. Taking up the lion’s share of your screenplay, Act II is where most of the action takes place. This is the meat of your story, with all the sub-plots, nefarious villains, secondary characters, globetrotting, investigation into mysteries, and smaller twists and turns.

During this act, the stakes get ever higher… until you reach your second plot point. Again, this major twist changes the game and signals an upcoming Act transition – and in the case of Act II, also provides a moment of crisis for your hero. In a dramatic sense, this is where all hope feels lost – where it seems your hero cannot possibly prevail against the stronger forces rallied against them.

Yet despite the odds, they carry on to Act III – the Resolution. The final confrontation takes place; the action and drama reach a climactic crescendo… and then (in what is known as “falling action”) the story tapers off.

Things calm down again; the battle is over and we’re given time to appreciate how both the world and your hero have been irrevocably changed by what has happened.

That’s the three act structure in a nutshell. And whilst its effectiveness in storytelling (not just screenwriting) is tried and true, it can be difficult to keep up the energy — especially during your second act in particular.

Employing the Matryoshka Effect makes it so much easier.

What is the Matryoshka Effect?

If you don’t recognise the word straight away, the term references those cute little Russian dolls.

But it doesn’t have anything to do with painted wooden figures, or even Russia itself.

It’s to do with a unique function of these dolls: Nesting.

Take Act I for example. We know that Act I’s overall function is the Setup, so that function remains as what we’ll call the Primary Act.

To start your nesting, take Scene 1 and break it down into its own little set of three acts: Setup, Confrontation, and Resolution.

Within that single scene you’ll introduce what’s going on, provide conflict for your protagonist to face, and then resolve that conflict – with something having been learned from the experience. It’s like a mini representation of the bigger structure – a little arc of its own that feeds into the main story.

Then you’ll do the same for Scene 2, and Scene 3 – without losing sight that in the overall scope of your story, you’re still in the Setup phase.

So if Scene 1 had your main character visiting their local store, you’ll set up where they are, where they need to go and why they need to go there. On the way, something happens – a tyre blows (car is the antagonist), they forgot to bring money, or the shop only accepts cash (confrontation with shopkeeper).

Bring that confrontation to a dramatic head, resolve it, and then move on.

Now, a “dramatic head” doesn’t mean there needs to be a kung-fu throwdown with the store owner or anything of the sort, but there should be something that can be recognised as a mini plot point – usually a character beat.

How does your protagonist resolve this threat? What have they learned and what do they express before this scene begins to transition to the next?

If you break your major Acts down scene by scene, and then construct each of those scenes as their own three act structure, you’ll quickly find your screenplay developing into a taut and riveting experience, where dramatic conflict (however subtle it may be) lies around every turn.

That’s how you grip an audience.

What to Watch Out For

It takes practice to really get this down – the easiest trap to fall into is losing sight of your Primary Three Acts – those that sit above the individual scenes and form the main structure of your story (along with its Primary Plot Points).

Remember that the smaller plot points of your nested three act structures should never become more important than the Primary ones. Always keep your eye on the bigger picture – consistently feeding and making progressing in your main plot – and don’t get pulled off course by making your mini-structures too intricate.

A great film that should show you the effectiveness of this is Damien Chazelle’s Oscar-winning Whiplash. A character drama through and through, Whiplash nonetheless contains enough meaningful conflict to fuel multiple war movies.

And the tense ups and downs are almost constant.

Nearly every scene is a structured battle for protagonist Andrew – whether it’s butting heads with his ruthless music instructor, fighting the clock for appointments, dealing with the sudden theft of sheet music or getting caught up in an unexpected traffic collision. There’s always something he’s forced to overcome.

If you haven’t seen Whiplash, rent it. If you’ve seen it, watch it again.

Watch carefully with the Matryoshka Effect in mind… and you’ll see exactly how it can turn almost any script into a supercharged powerhouse that audiences can’t look away from.

Then go and nest it into yours.

Join the Discussion on “Beyond the Three Act Structure: Supercharge Your Script with the “Matryoshka Effect””